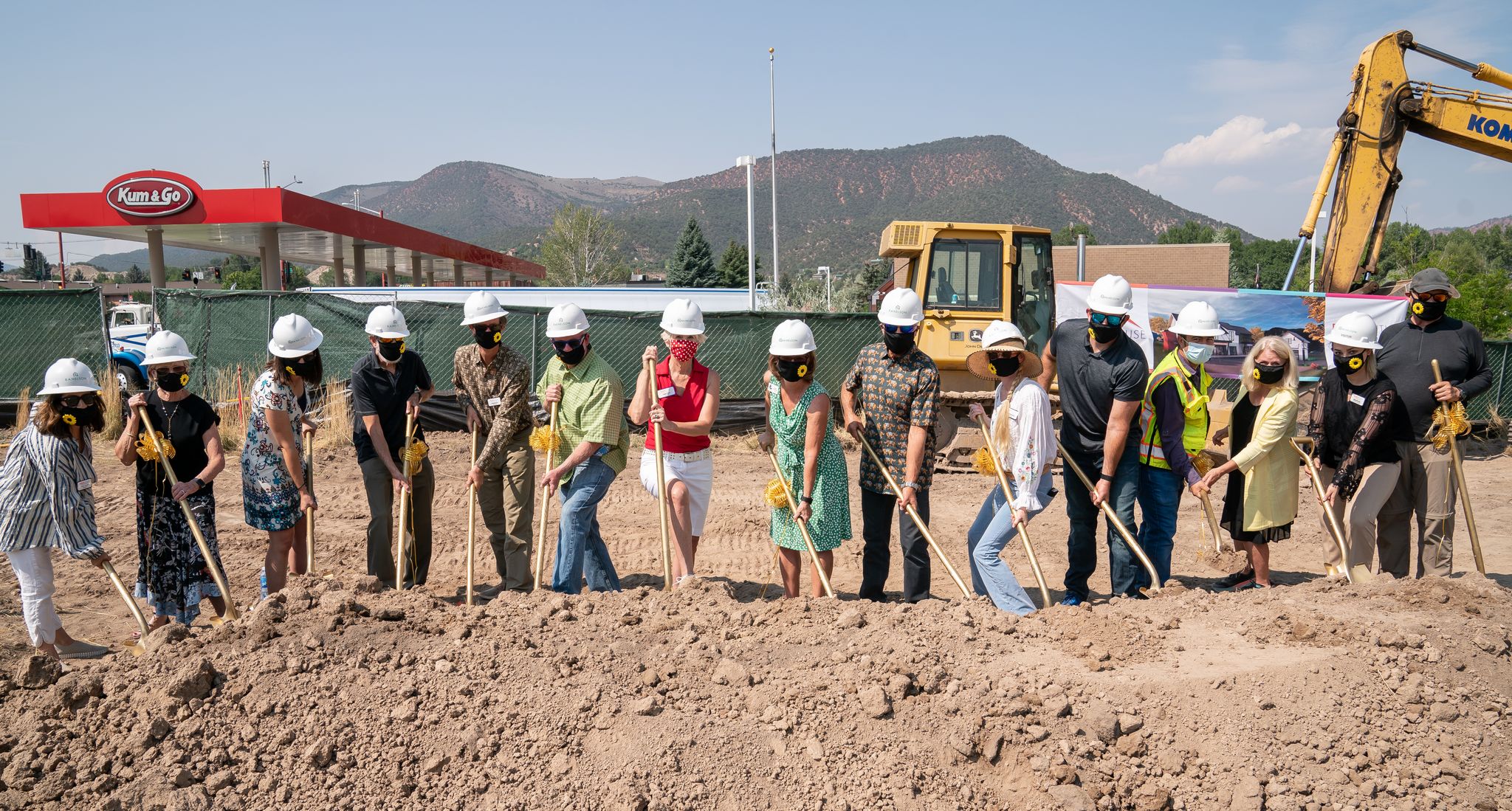 PHOTO: Community stakeholders break ground Tuesday on a years-long effort to create a permanent shelter for victims of domestic abuse in the Eagle County
Photo Credit: Dominique Taylor | Special to the Daily

A years-long effort to create a permanent shelter for victims of domestic abuse in Eagle County came to fruition with an official groundbreaking in Gypsum on Tuesday. The Bright Future Foundation, which operates the shelter, hosted the event, welcoming leaders and contributors from around the community who were involved in the project.

The BrightHouse will replace the aging Freedom Ranch safehouse, whose location was kept confidential since it began operating in 2002. That facility was located on government property, and the lease was not renewed, which spurred a multi-year effort to find a permanent replacement.

The BrightHouse will be an upgrade with greater capacity for families, offering shelter for 24 individuals and six families. The facility is intended to serve as temporary emergency housing while Bright Future Foundation staff advocates to help victims secure permanent and safe living arrangements. The BrightHouse will include common areas intended to engender community interaction, a children’s playground, garden, counseling and staff offices.

The $3.5 million capital campaign was initiated in the summer of 2017 with a $1 million lead gift by BFF board member Doe Browning, and other major donors followed, including Eagle County Government and Colorado Department of Local Affairs. Meanwhile, community members Dr. Agnes Hsu-Tang and Oscar Tang topped off the campaign with a $400,000 challenge match, which is ongoing and still seeking donations.

“Since the onset of covid, referrals through our 24/7 crisis hotline have increased by 50%, and our requests for housing assistance has increased by 122%,” Mintz said.

Mintz said finding safe housing for families fleeing from domestic violence has always been the most important mission of the Bright Future Foundation, and the Freedom Ranch safehouse has housed thousands of families since 2002. The BrightHouse will be the realization of a dream for the foundation since its inception in 1984.

By providing victims their own space to live in, but also having congregate spaces for further connection, and allowing pets, Mintz said the BrightHouse will have all the elements which allow victims to have the freedom to choose how they wish to integrate into the shelter.

“One of the most important things when someone is fleeing a situation and going into congregate housing is that they still feel like they can make choices,” Mintz said.

“Our research shows that so many women in abusive situations will not leave a family pet behind,” she added.

‘Who would we be?’
Mintz said the BrightHouse is the continuation of a long history of working with Eagle County Government, while county commissioner Jeanne McQueeney said working with the Bright Future Foundation helps the county align with its “deeply held value” of being a collaborative body.

“The county has to look carefully at how we support the various nonprofits within our community,” she said. “And so what we look at, is how do they align with our goals.”

Eagle County’s mission statement, “Creating a better Eagle County for all,” aligns with the safe harbor services available at the Bright Future Foundation and the BrightHouse, McQueeney said.

“And then there’s a further objective, that says to expand services to meet the needs of vulnerable populations, so again, you can see the alignment that we see when we choose to support Bright Future Foundation,” McQueeney said. “It really does, as an organization, help us to achieve our goals … when we think about who we would be as a community, if our most vulnerable did not have a safe haven, who we would be as a community if we were not able to protect the most vulnerable.”